A fascinating paper that describes an analysis of a (simple) microprocessor (MOS 6502) using only the tools available to and techniques employed by neuroscientists.

Portland is now getting some of its electricity from generators installed within water supply pipes and sewer lines.  Read more here.

This article beautifully articulates one of the joys of being human.

I have been on a horse precisely three times in my life. This photo was taken on the first such occasion. About five minutes afterward, the horse, named Winnie1, was running around the paddock at what seemed like about 100 mph with me hanging off to one side, held there only by my foot, caught in the opposite stirrup. I was four or five at the time.  My aunt  (whose horse it was) and uncle (the guy in the photo NOT on the horse) quickly ran over, got the horse under control and spent the 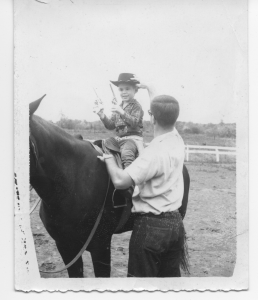 rest of the day attempting, with varying degrees of success, to calm me down — or, at least get that silent, open-mouthed scream look off of my face before my parents showed up to take me home.

I did not get back on a horse again until I was maybe 20.  A friend from school owned a horse and asked if I’d like to come along with her to feed and brush it.  She also planned to ride her a bit around the paddock. I reckoned there’d be no harm (to me) in that, so, I went along. The horse was nice and calm (turns out it was faking, plotting when and how it would make its attempt on my life) and lulled me into a false sense of trust. My friend finished her short ride, and knowing my apprehension of horses, asked if I’d like to just sit in the saddle for a bit.  Sure.   Why not.

I was still alive and well after a whole two minutes on horseback, so she (my friend) asked if I’d like to have a short walk with her (the horse) around the paddock.  “Uh … ok.”  After all, I thought, I was little when that other horse nearly killed me.   I’m a full-grown adult now.  I’m big enough to control this animal.  And if not,  I’d at least be able to get in a couple of good hits before this one did me in.

Five minutes later, there I was hanging on for dear life as that fuckin’ horse went racing around the paddock at what seemed like around 100 mph.   “Pull on the reins and say ‘Whoa!'”, my friend yelled.  I pulled and pulled on the reins, to no effect. “Whoa!!”. Nothing. “Stop!! Fermo!! Halt!! стоите!!”  The horse was evidently deaf in addition to being homicidal.

Still moving at break-neck speed,  the horse turned and headed straight for the (closed) paddock gate.  Just when I thought my fear of injury or death couldn’t be any greater, my friend opened up a whole new world of pants-shitting terror for me when I heard her hollering, “Don’t let her jump!!!!”.

I decided the only chance I had of getting off alive was to jump off while the horse was in motion.  I got my feet out of the stirrups and vaulted2 as best I could off the horse, still holding on to the horn on the saddle.  My feet no sooner hit the ground than the horse stopped dead in its tracks, maybe a meter or two from the gate. It swung it’s head around to look at me with a murderous glint in its eye that said, quite unambiguously, “Next time, asshole.”

The third (and so far, last) time was on a visit to Turkey around 14 years ago. We were on the island of Heybeliada, in the Sea of Marmara near Istanbul. There are no cars there; only horses and horse-drawn carts. My companion had never been on a horse and was dying to try it. There was a guy there with several horses for hire and he was happy to lead the horse by its tether for those who wanted to ride but were untrained. I figured, what could go wrong? So, we hired a couple of them and he led us for two or three kilometers under a perfect blue sky along one of the lovely, quiet, car-less green avenues that follow the island’s shoreline.

Our guide saw that both horses were behaving well, and my friend seemed to take to riding like a duck to water. He saw that I had taken to riding like a duck to bowling.   Still, the horse was well-behaved as it continued clip-clopping along, so he decided to let go of the tethers.  Both of them.   My friend and her horse kept right on going, the horse happily obeying her gentle tugs this way or that on the reins, the two of them making shallow S-turns as they ambled along.  My horse plodded along lazily, disinterested, slightly behind hers.   I just held the reins nice and steady, making every effort to not remind the beast that it still had me on its back.   Several blessedly uneventful minutes passed and I started to think that maybe horses didn’t have it in for me after all.

Of course, he was just biding his time, waiting until the man wasn’t looking, at which point he turned right around and headed off toward … I don’t know where … a quiet spot to murder me, perhaps.  In any case, the man soon noticed I’d been kidnapped and quickly came back for us.  He gave me an apologetic smile as he took up the tether, and continued to lead the horse, with me still on it, for the remainder of our hired time.

I’m not kidding when I say they want to kill me.

To be fair, I have had equine encounters that were not life-threatening.  One could even go as far as to say that they were pleasant.   While visiting a long-time friend in Arizona some years ago, she introduced me to her horse, Mage.   We eyed each other cautiously at first, but it wasn’t long before she was letting me pat her on the forehead and taking a carrot from my hand3.  By the end of our visit, Mage and I were getting on famously.  The trick, I found, is in knowing where you and the horse stand with one another.  I stand on one side of the paddock fence, and the horse stands on the other.  No miscommunication, and no one gets hurt.

My most recent encounter was with a neighbor’s two Australian miniatures.   These look either like fat ponies or rather well-built donkeys. Regardless, they turned out to have the sweetest most gentle temperament of any animal I’ve been close to that’s larger than, say, a great dane.4  Still, I kept to my side, they kept to theirs, and we all got along just fine and all walked away with no injuries.   I hear they’d be great for keeping what passes for a lawn in our garden under control.   I’m even tempted to see if one day we might get one.  Trouble is, these adorable little creatures live for 40 or more years.   Given my present age the odds are that, for them, it would simply be a waiting game.

It seems there is now research to support my suspicions that horses are out to get me.