In David Graeber’s Debt: The First 5000 Years, he goes into a lengthy discussion about slavery, pointing out that a slave is “invisible”. They have no identity, and must perform their functions without notice, without drawing attention.

The same holds true for all sorts of other people who we’re taught “not to see”. From an early age, we’re taught not to stare at the disabled, not to go near poor people lest they try to grab us, or steal from us. In major cities, you simply do NOT make eye contact with anyone, ESPECIALLY the wretch begging on the street, or passing hat or cup on the subway. (In New York it is a crime to give money to someone panhandling on a subway or bus.) And so it goes for people in pain, who are drowning, who are dying. Don’t look. Don’t touch. Act like they’re not there. Invisible. Even when we do put a coin – or a bill- in the cup, we make sure not to make eye contact. It isn’t giving; it’s absolving ourselves, telling ourselves we’ve somehow helped, done our part. Yet, we never see the person, never see their poverty, their pain, them. Invisible.

I used to struggle with what, if anything, to give when I encountered a panhandler. Small change seemed like too little, perhaps even insulting. Enough for a meal might be good, but, how many meals for how many people, how often? Can’t help all of them, so now I must choose? Better to simply let all of them go hungry. That’s “fair”, right? And if I happen to have a $5 or $10 in my pocket, well, don’t I feel like the grand duke for giving someone that. And won’t that just make them the target of some other “thieving beggar”? Don’t want to feel haughty for giving alot, nor guilty for making them a target. And I sure as hell don’t want to look them in the eye and give them a glimpse of the discomfiture they’re causing me. Look straight ahead, keep walking, nothing to see here. Invisible.

I finally realized that while we no longer have slavery (as such) we deal with poverty – financial, spiritual, health (i.e. poor health) – in much the same way. We make the poor, the sick, the suffering, the dying. Invisible.

The solution is simple: SEE them. Put the coin, however small, in the cup. And when you do, don’t just drop it without stopping, never making eye contact. Stop, look at them, and say something to them, something that says, “I see you.” It doesn’t have to be in so many words, or in many words at all. “Good luck, mate!” is enough. I’ve never had a negative response to this. They always look up at me, smile, say, “God bless you”, or something along those lines. What you’ve given them isn’t money, or drugs, or booze, or food. You’ve recognized their humanity, their presence, their being. You make them … visible.

I first met Suzie at the Liberty Humane Society Animal Shelter almost 14 years ago.  She was one of a litter of four, nearly identical kittens.  Three of them were fast asleep with mamma.   Suzie, however, was wide awake, and completly engros 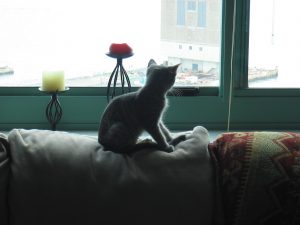 sed in the obviously very serious business of catching a gnat.   She was still a bit too young to bring home that day, but I adopted her on the spot and picked her up from the vet, where she’d been spayed, a few weeks later.
Our dear little companion, Suzie, breathed her last at 8:31 this past Sunday morning while my wife held her.   As we lay awake, stroking Suzie to comfort her through her final hours, we could feel her start to purr a little.    You have to understand that Suzie always purred quietly, very softly, almost imperceptibly.  Yet now we could feel her quite unambiguously — I’d say even audibly — purring.   Whether it was a sign she was improving or just her letting us know she was alright, comfortable, didn’t want us to be sad, grateful for our being there with her, for her, I didn’t know.   I guess I do, now.   She yowled, weakly, once or twice during the night, in pain, sad to be leaving us, a bit of both?  It’s only natural to anthropomorphise whatever she was experiencing.   Seeing her yellow eyes, pupils now completely dilated brought to mind another little grey, yellow-eyed being that visited several years ago.
I was home alone one night not long after we’d moved to our present home, when I heard a commotion in the back garden.  I looked out and could see something jumping around in the dimly-lit shadows on the upper of the two terraces just outside our back door.  Torch in hand, I went to investigate further and found a tawny frogmouth — a small, grey species of raptor (often mistaken as an owl) common to these parts —  flapping about, dazed, perhaps wounded.    I went back inside and called our neighbours down the street who I knew to be trained in wild animal rescue.  They said to wrap it in

something warm — a towel — and bring it down.   I went back out with the towel, and gently picked up the wounded bird.   It weighed maybe half  kilogram at most, grey feathers, and had large,  yellow eyes.

I gently carried the bird down to our neighbours (Steve and Carol) and Steve was there waiting for me outside.    The owl, which I could feel still moving (if only a little) when I first picked her up was now still, it’s pupils completely dilated showing only thin bands of yellow-gold around the edges.    The bands of yellow gold in Suzie’s now lifeless eyes looked like well-worn wedding rings, and brought Edward Lear’s poem, “The Owl and the Pussycat” to mind. 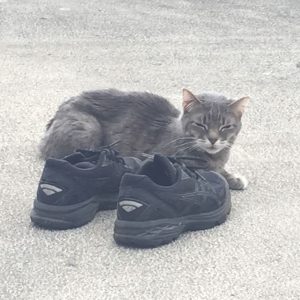