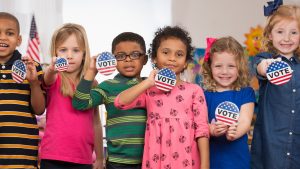 References to and comparisons with Hitler’s rise may be valid, however, I think a more accurate comparison can be drawn with Romania’s pre-WWII  “Iron Guard” movement  and its leader Corneliu Codreanu.   This became the basis for Eugene Ionesco’s “Rhinoceros”, a play that depicted the transition of a group of ordinary people into a herd of these animals, one by one, each with their own rationale for accepting them and then becoming one themselves.   We read this in high school (mid-70s) and it comes to mind whenever I see people I thought I knew and even respected begin to embrace right-wing authoritarianism, something I thought they abhorred as much as I.

Right-wing fascism has reared its ugly head many times throughout history, wearing many masks.   The players, populations, and languages differ, but, the circumstances and warning signs are nearly always the same: 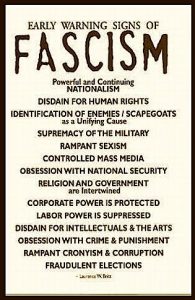 The good news is that, notwithstanding claims of “the death of liberalism” that fascists and their apologists seem often chant these days, it is in fact fascism, authoritarianism that is typically short-lived.   Like its economic concubine, speculative capitalism, it survives on the necessarily increasing output and consumption of it’s own excrement, and soon meets its end by starvation, or sepsis from having swallowed too much of its own shit.   Democracies, or at least regimes that recognise their power as being derived from the compliance (or complacency) of the governed survive for centuries; authoritarian regimes rarely last more than a few decades.

I’d be willing to bet that the articles of impeachment against Trump were drafted even before he took office — possibly even before the election.   Both Putin and the Republicans saw him as a “useful idiot” and they’ll continue to pull his strings until the FBI and other investigative agencies have all of the ducks lined up to bring him down.  At which point, Trump will either be convicted and removed, or he’ll resign, or 25A will be invoked.  In any case, Pence will be installed and, whereas Trump was a useful idiot, we’ll now have to deal with a complete moron until 2020.   With any luck enough of the benighted fly-over (by then they’ll be more aptly-named fucked-over) states will have seen the folly of voting for Trump and use their votes to say “fuck you” right back.

In the mean time, however, we’ll see a rise in anti-anyone-who-ain’t-white-christians-like-us violence and threats to persons and American Democracy itself.  The last, best defense, there, will be the courts.  My greatest fear, is that we’ll start to see judges assassinated, as has happened when such regimes have taken over in Latin America, for example.   We can worry ourselves over the circus going on in Washington and state capitols across the country, but such assassinations are, to me, far more worrisome.   Two of our government’s three branches have been weakened by three decades of relentless, right-wing undermining of people and principles, leaving the judiciary to stand against it, alone.  Unless and until we see that start to happen, I have great confidence in the ability of our constitution and the democracy that it implements to endure and prevail.

To many white Trump voters, the problem wasn’t her economic stance, but the larger vision—a multi-ethnic social democracy—that it was a part of.

Here you’ll find a well-researched, well-written article rebutting several myths about the DNC, Bernie, and other anti-Hillary propaganda from this year’s election cycle.