My friend, neighbor, and fellow-activist Garry Muratore posted this earlier today on his facebook page.  I’m re-sharing it here, with his kind permission, for the greater good of all mankind1.  The item you see in the photo appeared in a local paper in Jersey, UK.

*Additionally, the reader not acquainted with British or Australian politics must understand that the Liberal National Party are only liberal when it comes to corporations. In all other respects, they tend to espouse right-wing (social) policy.  Garry’s comments allude to items that have appeared in the media2 over the past few months. 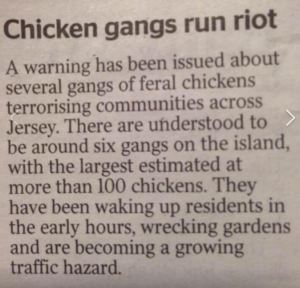 Imagine if this was happening here in Victoria. If it did it would go something like this……

Liberal Opposition Leader Matthew Guy would claim chicken crime up 72% since Labor came to office and if elected in November his government would show zero tolerance to chicken gangs.

The Herald Sun3 would devote 27 front pages to chicken gangs and somehow tie them to John Sekta and the CFMEU. Several editorials will question “why are the courts soft on chickens.”

Local State LNP MP’s would use tax-payer funded printing to letterbox hundreds of suburbs claiming “Labor plan to build more coups, is your suburb next?”

Peter Dutton4 goes on Sydney’s 2GB telling Ray Hadley, people in Melbourne are scared to go out due to fear of chicken gangs.

Pauline Hansen5 will call a press conference pointing out that chicken is Halal (wake up people!)

KFC6 would receive a $2 Billion contract to process rogue chickens on some Pacific Island. The ABC7 would be banned from visiting.

The Panama Papers would reveal that Malcolm Turnbull8 has huge investments in poultry related technology companies. All profits are declared in the Bahamas.